BASKET BOAT IN HOI AN

BASKET BOAT IN HOI AN

Had your fill of Hoi An Old Town’s shops and markets, and sunbathing at Cua Dai Beach is just too tranquil? Then enjoy a basket boat ride at the Coconut Boat Village Hoi An in-between.

Legend has it Vietnam’s basket boats originated as a way for local fishermen to avoid paying taxes imposed during the French colonial rule. Others say the boats were born out of necessity as they were more practical than traditional fishing boats.

Whichever the case, the basket boats have become an endearing symbol of life along the central and southern Vietnamese coast for business, pleasure, and now tourism. Nowhere is this more evident than in Cam Thanh, also known as Hoi An’s Coconut Village or more informally, the Coconut Boat Village, just a few kilometres east of Hoi An’s Old Town.

In this article, Hidden looks into experiencing a basket boat ride yourself. Where a local guide skippers you through the eight-hectare network of water coconut palms, onboard a sturdy, all-natural vessel. It won’t leak, capsize, or have you swimming for shore. It’s fun for the entire family. So keep reading to find out the history of the boats themselves and the best way to experience the Coconut Boat Village in Cam Thanh. 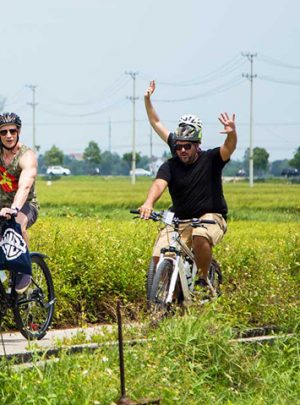 Hoi An Bike Tours
Choose from a full- or half-day countryside bicycle tour and get to see a glimpse of the beautiful areas surrounding Hoi An. The Hoi An full-day bike tour includes a river ride on the Hoi An river and one hour’s biking around Kim Bong carpentry village. Both bike trips including cooking and enjoying lunch with a local family, and the chance to wander round local markets and vegetable villages. Hoi An Bike Tours also offers motorbike tours to the most famous attractions around the city: Marble Mountain, My Son, etc… 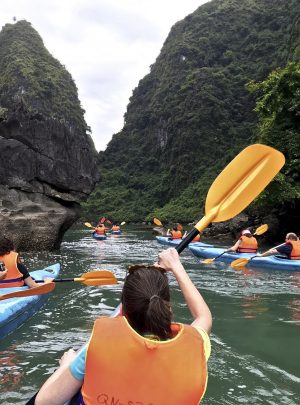 Joining kayaking in Halong Bay, tourists will have a great opportunity to explore the monumental bay with breathtaking scenery of numerous distinctive cliffs and pretty waterfalls, as well as the typical lifestyle of local fishermen on fishing villages. 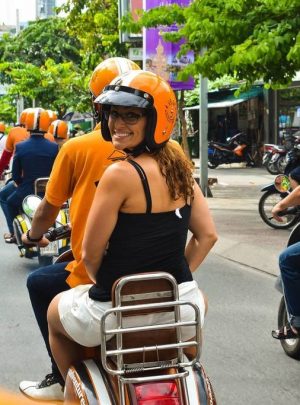 If you’re looking to travel like a local during your holiday, joining a motorcycle tour is an exhilarating (and safe) way to visit popular landmarks and districts within Ho Chi Minh City. Priced at VND 1,000,000 onwards, the package is usually inclusive of hotel transfers, lunch, drinks, helmet, insurance, and an English-speaking tour guide.

While prices and locations vary from one tour operator to another, a motorcycle tour usually stops at iconic sites such as Saigon Opera House, Notre Dame Cathedral, Saigon Central Post Office, where the tour guide will provide a brief history and interesting facts on each locale 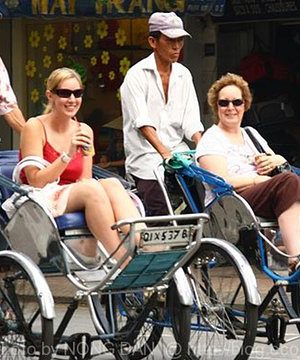 The cyclo is a three-wheel bicycle taxi that appeared in Vietnam during the French colonial period after a failed attempt to introduce rickshaws. A double seat (for Vietnamese – an average foreigner would find riding with a companion a bit of a squeeze) is supported by the two front wheels, with the driver sitting behind. The design in Ho Chi Minh City differs from the Hanoi variety in that the driver sits much higher (as do the prices!).

In the big cities, their use as a means of passenger transport has all but vanished over the last two or three years. Taxi fares have dropped, and fleets of buses with low fixed fares have greatly undercut the market – a journey from one side of either of the major cities to the other cost less than half a kilometre in a cyclo.

Nevertheless, they remain as a popular tourism attraction, but are not generally useful the vietnam’s cyclo for touristsfor city tours because they are banned from many major roads as traffic hazards.

They still reign supreme in carrying awkward loads along city roads, sometimes much to the annoyance of other road users. For visitors, it’s a good idea to have a camera to hand to snap the unlikely loads they carry – complete bedroom suites, live pigs, ten-metre scaffold poles and much more.

If you want to hire a cyclo, always negotiate the fare in advance. If you fail to do so, the driver will often ask for an exorbitant price and then blackmail you into paying it by making a major fuss in the street that will immediately attract a crowd. This is particularly so in Ho Chi Minh City.

The Saigon-style cyclo – the driver sits on a much higher saddle than the northern versionGenerally speaking, you should offer about a third of the sum quoted, and haggle up to no more than a half. Walking away will often turn an unacceptable price into an agreed sum.

However, it’s likely that the driver will not drop to the Vietnamese price, though – dual pricing has only recently been phased out, and cyclo drivers still stick to their belief that all foreigners are rich and can therefore afford to be more generous. Mostly, they’re right! 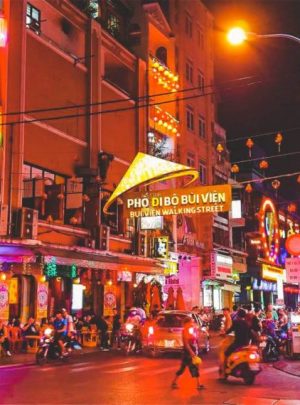 Bui Vien Street is the main street of the so called ‘backpackers area’ of Ho Chi Minh City. Here you find a wide variety of inexpensive restaurants, bars, souvenir shops and hotels/hostels. While being seated at one of the places you can soak up the local lifestyle and culture. You can shop, dine and party on Bui Vien Street.
The total ‘backpackers area’ consist of roughly four streets and some small interconnecting alleys. To have dinner here is very affordable and will cost you around VND 100-200.000 (US$ 4-8), for this amount you will have a decent meal including a drink. The options vary from Vietnamese, Indian, Italian to Chinese and Western.

On Bui Vien street you also find many bars that offer drinks with a view of the busy city life. Depending on the location you can have a beer for VND 10.000 to VND 80.000 (US$ 0.5-3). Besides this there are many souvenir shops that sell affordable gifts ranging from paintings, statues to clothing and bags. As this is the heart of the city centre it can easily be reached by foot or taxi and almost all locals in here speak English. It gets busiest from early evening, around 18:00, with the many bars and pubs popular until 02:00 or even later. 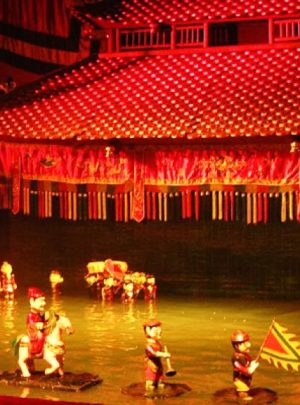 Water puppetry (Vietnamese: Múa rối nước, lit. “Making puppets dance on water”) is a tradition that dates back as far as the 11th century when it originated in the villages of the Red River Delta area of northern Vietnam. Today’s Vietnamese water puppetry is a unique variation on the ancient Asian puppet tradition.

The puppets are made out of wood and then lacquered. The shows are performed in a waist-deep pool. A large bamboo rod supports the puppet under the water and is used by the puppeteers, who are normally hidden behind a screen, to control them. Thus the puppets appear to be moving over the water. When the rice fields would flood, the villagers would entertain each other using this form of puppet play.